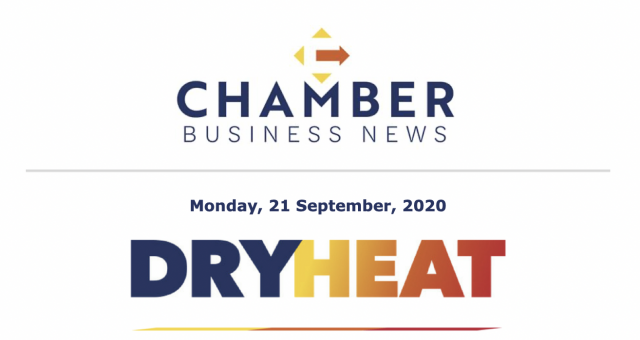 In a virtual event sponsored by Total Spectrum, two statesmen with deep roots in Arizona call on voters to say “no” to Proposition 208, saying it would place Arizona as one of the highest income tax states in the nation.

by Victoria Harker, Arizona Chamber of Commerce and Industry

Two statesmen with deep roots in Arizona are calling on voters to say “no” to Proposition 208, saying it would place Arizona up there with New York and New Jersey as one of the highest income tax states in the nation.

That would kill many small businesses, cause job losses and shrink tax revenues that support schools and government services, said former Vice President Dan Quayle and former Arizona U.S. Senator Jon Kyl at a virtual event hosted by the Arizona Chamber of Commerce and Industry. The event was sponsored by Total Spectrum, HSL Properties and the Keating Companies.

“Let me be very clear: We are now recovering from a 100-year pandemic and this initiative wants to raise taxes 77.7 percent on individuals and small business? That should be the end of the discussion,” said former Vice President Dan Quayle, a longtime Arizona resident who grew up here.

The initiative, which seeks to tax certain earners to help fund education, would raise Arizona’s top income tax rate from 4.5 percent to 8 percent — a 77.7 percent increase — for individuals who earn over $250,000 and households that earn over $500,000.

Small businesses would shoulder much of the costs

What most voters do not realize is that a majority of small businesses in Arizona file under the individual tax code, not as corporate filers, said Kyl, who served as a U.S. senator from Arizona 1995 to 2013 and again in 2018.

If the initiative is passed, those companies could end up paying nearly double the 4.9 percent tax rate that big corporations pay.

“More than half of all small businesses pay their taxes as individual income taxes,” Kyl said. “The people who are going to suffer are all of those small business owners and their employees. We’re talking about the dry cleaners, the plumber, the electrician, the pesticide control.”

At the event, Quayle and Kyl urged about 100 community and business leaders in attendance to educate their constituents on why this initiative is the wrong path for education funding.

They listed a number of reasons why, including:

1. Arizona could lose its competitive edge to surrounding states

A sharp tax increase on individuals and small businesses would put Arizona at a disadvantage when competing with nearby states with similar
or no income taxes like Colorado, Nevada, New Mexico and Utah.

“We’ve had a great opportunity for people moving here because other states have messed up. They’ve raised taxes. They’ve made it very unfavorable for businesses and we’ve benefited from that,” Kyl said.

If residents and businesses start to fail or flee the state, there are estimates that Arizona could lose a minimum of $2.4 billion in revenue over the next decade as a result of a reduction in business recruitment, job growth, and wages.

Under the weight of this proposed tax increase, about 90,000 wealthy residents would be impacted. Many may be motivated to leave the state. Others would be less likely to move here. The same goes for new investment.

Not only would local and state coffers suffer, so would charities and nonprofits that rely on donations from benefactors and local companies.

If Proposition 208 passes, it will be nearly impossible to alter, even in the case of some unintended negative consequence. Once passed by voters, it takes a three-fourths vote by the state Legislature to change a voter initiative. Then, any changes made to the act must further its purpose.

“This is permanent. It’s almost impossible to change,” Quayle said. “A small business may not earn $250,000 today, but five years from now, they’d like to.”

5. Proposition 208 does not adjust for inflation

Unlike current state and federal tax rules, the proposition fails to adjust for inflation. That could sweep more small businesses into higher tax brackets year after year.

6. Most of the funding comes from an out-of-state group

Most of the funding for the initiative’s campaign comes from the Portland, Oregon-based Stand for Children, Inc. with over 87 percent of contributions totaling more than $4 million coming from the group.

Arizona has been able to increase its funding for education over the past four years because of its fast growth and healthy economy before the pandemic, both speakers said.

Today, Arizona has a reputation as friendly and open to business with a relatively low tax base, Quayle said. That could change overnight if the initiative passes.

“If we go from 4.5 percent to 8 percent, Arizona is going to be known as a fly-over state. Pure and simple.”