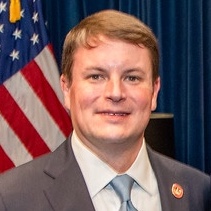 Blake T. Fulenwider is an expert in healthcare policy, honed over 15 years’ experience at the federal and state levels of government. He is a well-known and respected voice with an impeccable reputation as a trusted healthcare leader among federal and state Executive Branch officials, members of Congress and the Georgia General Assembly, stakeholders and advocates across Georgia and the nation.

Blake has served in senior leadership roles in Georgia government healthcare administration for a decade. As Deputy Commissioner of the Department of Community Health (DCH) for Governor Nathan Deal, he successfully completed the first comprehensive reorganization of the agency’s Medicaid division in over 20 years with the goal of improving outcomes and customer service for beneficiaries and providers at the forefront.

In November 2018 he was tapped by Commissioner Frank W. Berry to serve on the DCH executive leadership team. As Chief Health Policy Officer, Blake was responsible for oversight and operation of the Division of Medical Assistance Plans (Medicaid and the Children’s Health Insurance Program (CHIP)), the State Health Benefit Plan, Office of Health Analytics and Reporting, and Office of Continuous Program Improvement. Collectively, these programs comprise more than $13 billion – 98% of the DCH budget – and provide health insurance coverage to one in four Georgians.

Governor Brian P. Kemp directed Blake and DCH to develop and implement innovative waivers to address access, affordability, and quality of healthcare across the state. Blake, in conjunction with the Governor’s office, drafted, submitted, negotiated, and successfully gained federal approval of two novel waivers pursuant to the Patients First Act. These groundbreaking waivers are being implemented at this time and are a model for the nation.

Blake also served as the Healthcare Reform Administrator for the Governor’s Office of Planning and Budget during implementation of the Affordable Care Act, as well as Deputy Commissioner of DCH after service in the Governor’s Office. He was Governor Nathan Deal’s first Health Policy Advisor and served then-Congressman Nathan Deal for four years in a similar capacity in Washington, D.C. In Washington, Blake led Congressman Deal’s healthcare agenda, including management of the Patient Protection and Affordable Care Act (PPACA), food safety modernization, establishment of a biosimilar drug approval pathway, CHIP reauthorization and Congressional response to the 2009 H1N1 influenza pandemic.

He is a graduate of the University of Georgia with a Bachelor of Business Administration – Finance. Blake’s experience solidifies his credentials as a healthcare expert, as well as a trusted voice among leaders in Georgia and Washington, D.C.